The animal rights (AR) movement is one of the fastest growing social justice movements in history. There are now a number of groups that are radically challenging the system of animal exploitation. The question is: what does the AR movement do that makes it successful?

I have spent countless hours participating in protests, awareness and education programs, writing petitions and bills, and protesting outside slaughterhouses. After years of being an active part of this movement, here are some of the key lessons that class struggle organizations or any other racial/gender justice groups can take from and learn from animal liberation advocates.

For the purposes of this article, I have categorized these tactics into five different pillars.

is key if you want your activism to be intersectional. These types of activities not only position your organization as pro-working class, but also allow you to stay in touch with the people who are struggling and who are your comrades in the fight against the establishment. During the process, you will help them even in the most direct way. People tend to be fed up with their everyday lives and problems and don’t really have the energy to talk or think about Hegelian perspectives. More often than not, they need a kind act and a kind word, someone by their side. animal rescue movement recognized him with their Mutual aid actions, where they donate plant-based foods to those in need, as well as a flyer that promotes their ideas and explains why being vegan is important. Food not bombs does something similar. It is in human psychology that when someone receives something, they want to give something back. This can lead to a change in attitude. I’m not saying you should abuse this or associate with people, but if you’re talking about class/gender/racial inequality or environmentalism and animal rights, you’re doing a good thing and changing the individual in the world. process. An added layer is being in contact with the people and animals we fight with and for. It is easy to get lost in theoretical principles and education removed from events on the ground, so it is important to constantly remind ourselves why we are doing this.

Have you ever seen people holding (fake) dead animals in your city? Or have you ever seen someone wearing an Anonymous mask holding a laptop with a sign saying “truth”? Then you have been exposed to the actions of animal liberation advocates! And I bet you couldn’t just look away. If you haven’t encountered this, let me tell you. Many organizations, including PETA and Direct action everywhere (DxE) holding “dead” animals to portray the condition they endure permanently in slaughterhouses, fur farms or egg farms. This kind of emotional shock often causes people to educate themselves and eventually stop funding these industries. Activists would then be there to provide more information and leaflets. Slightly less shocking but equally effective actions are made by Anonymous for the voiceless (A V). AV is famous Cube of truths, where activists stand in cubic shapes on the streets wearing anonymous masks while holding their laptops and tablets that depict animal cruelty videos that regularly occur in this industry. But that’s just conversation starter. Once you approach to watch videos, someone called the “intervener” will approach you and start asking questions. No, they won’t just tell you why veganism is a moral way of life. Rather, they will engage in a Socratic method conversation that has proven effective in changing attitudes. The key element of this method is to get the person to come to a conclusion themselves, embracing logic with tactilely developed questions, in this case about why they are not yet vegan. Of course, during the process, you would also get information about what is happening within the animal agriculture industry, but you would be the one talking the most and answering questions.

Even though this tactic is not very popular, it is extremely effective and has been used by some AR organizations that have inflicted considerable damage on animal abusers. For example, Stop Huntingdon Animal Cruelty (SHAC) was an international animal rights campaign to shut down Huntingdon Life Sciences (HLS), Europe’s largest contract animal testing laboratory. Activists lobbied primary, secondary and tertiary figures. They first emailed and phoned the attackers and the company itself, then showed up outside the attackers’ homes with megaphones and whistles, disrupting their daily activities. Then the campaign extended to secondary and tertiary targets; including shareholders, suppliers and banks by carrying out the same actions mentioned above. All would receive the footage of what is happening in HLS, along with information on why it is unethical and unscientific. To demonstrate the power of this tactic, allow me to quote an article about it:

“SHAC also turned its attention to other companies and investors that had a connection with HLS. Many, including the embarrassed Labor Party (which held shares in HLS through its pension fund), withdrew their money to avoid further harassment. Institutional investors, including Shroeders, also pulled out. Unsurprisingly, the company’s value plummeted: valued at £360 million in 1990, its market valuation fell to £5 million in 2001. HLS was also delisted from the New York Stock Exchange. When protests directed at his bankers, the Royal Bank of Scotland, led to his account being closed, the Bank of England – at the behest of the British government – ​​was forced to step in and provide banking facilities. It was an unprecedented step. 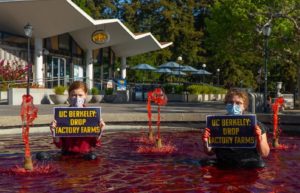 The aforementioned DxEs have gained so much publicity and support for their bold and sweeping actions. To name a few, they regularly chain themselves inside slaughterhouses to prevent them from functioning (similar actions are carried out by Meat the victims). They are also protesting against large fast food chains such as McDonalds with loud noises and graphic images of killed animals, and they are organizing sit-ins in strategically important places to raise concerns about Rose’s Law. Additionally, unlike the Animal Liberation Front, which rescues animals with their masks on (see below), DxE engages in open rescue, as a statement that the right to save animals from being killed is a moral act, even if it is illegal. “One has a moral responsibility to disobey unjust laws,” Martin Luther King Jr. once said. Open rescues are seen by millions and force the issue of animal rights into the public consciousness. DxE activists are now going to court over bailouts at some of the world’s biggest factory farms. 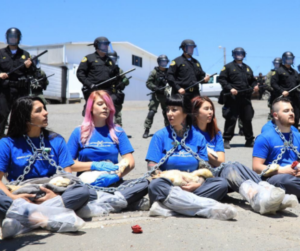 We now come to the most controversial way of carrying out activism, which we will analyze through one of the groups with the greatest legacy – the Animal Liberation Front (ALF). ALF is a bit like Antifa – it’s more of a movement than an organization, and everyone is welcome to identify themselves as a member if they follow its basic principles: nonviolent direct action to protest incidents of animal cruelty. The ALF is best known for its raids on animal testing laboratories. During the raid, they rescued the animals and took the images filmed by the researchers and, in some cases, the equipment was destroyed. As a result of these actions, ALF shut down many businesses that simply could not recover from the economic sabotage they suffered. The same goes for slaughterhouses and fur farms. The fact that the ALF was ranked #1 on the FBI’s list of domestic terrorism threats to the United States speaks volumes. The leaderless movement that operates in small cells, that never harms a living being was above the white supremacists. It seems lost profits hurt the FBI more than lost lives. Surprise Surprise.

As one ALF member put it: “If we intrude, so did the American soldiers who broke down the gates of Hitler’s death camps; if we are thieves, so were the members of the Underground Railroad who freed the slaves of the South; and if we are vandals, those who destroyed forever the gas chambers of Buchenwald and Auschwitz were also vandals.

I’m not saying we should just directly implement everything written here, but we need to elaborate on these issues and analyze what works and what doesn’t, and what worked and what didn’t. did not succeed. Before we jump into activism ourselves, there is a ton of strategic planning that has already been done, both inside and outside of our movement. We have to use it. Act smart and be on the right side of history.

Would you like to be informed of DiEM25’s actions? register here

While the new 33,000 square foot Animal Resource Center, which opened on November 2 at 980 Guilford College Road, is impressive, for Jorge Ortega the building is not about appearance but functionality. For this, Ortega, director of Guilford County Animal Services, gives it five stars. The emphasis is on the well-being – mental and physical […]

Animal adoptions at Chino Valley Animal Shelter are sponsored by the Bissell Pet Foundation this month only!

Open the audio article player Through Staff | to December 18, 2021 Presented by Beltone – A leader in audience health care. Until December 20, the BISSELL Pet Foundation is bringing holiday hope to pets across the country. This event will be held in more than 200 shelters in 40 states, including Chino Valley Animal […]